There are no such things as "Authenticity Points". It's time to stop focusing on our brokenness and concentrate on modeling "Christ-likeness".

From the article: "Sin is necessarily part of our story as redeemed people. We shouldn't ignore or make light of it. But we also shouldn't wallow in it or take it lightly, for the sake of earning authenticity points."

In recent years, evangelical Christianity has made its imperfection a point of emphasis. Books were published with titles like Messy Spirituality: God's Annoying Love for Imperfect People, Death by Church and Jesus Wants to Save Christians, and churches popped up with names like Scum of the Earth and Salvage Yard. Evangelicals made films like Lord, Save Us from Your Followers, wrote blog posts with titles like "Dirty, Rotten, Messy Christians," and maintained websites like anchoredmess.com, modernreject.com, churchmarketingsucks.com, recoveringevangelical.com, and wrecked.org—a site that includes categories like "A Hot Mess," "Muddling Through," "My Broken Heart," and "My Wreckage." 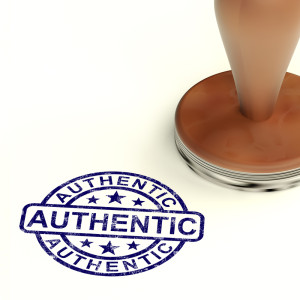 Evangelicalism—both on the individual and institutional level—is trying hard to purge itself of a polished veneer that smacked of hypocrisy. But by focusing on brokenness as proof of our "realness" and "authenticity," have evangelicals turned "being screwed up" into a badge of honor, its own sort of works righteousness? Has authenticity become a higher calling than, say, holiness?

How Did We Get Here?

Erik Thoennes, professor of biblical and theological studies at Biola University, sees the authenticity trend in the undergrads he teaches. At the beginning of each class he asks his students to write down two things they love and two things they hate. Consistently, one of the things they say they hate is "fake people." But the Christian life involves a whole lot of "fakin' it" on the path to being integrated, Thoennes says.

Thoennes hopes his students understand that sanctification involves living in a way that often conflicts with what feels authentic. Still, he gets why younger evangelicals have such a radar for phoniness. They grew up in an evangelical culture that produced more than a few noteworthy cases of fallen leaders and high-profile hypocrisy. Their cynicism reflects a church culture that often hid its imperfections beneath a facade of legalism and self-righteousness.

All of this contributed, in the early and mid-2000s, to an authenticity boom in evangelicalism. Recognition of the biblical calls to confession (James 5:17) and "walking in the light" (1 John 1:5-10) had not gone away in Protestantism; they just became more and more couched in language of being real, raw, transparent, and authentic in community.

Typical of the many articles written about the topic is Josh Riebeck's 2007 piece for Relevant, "Fighting for Authenticity," which announced that "authentic community, authentic faith, and authentic Jesus are the cry of the new generation."

But why must "real" be synonymous with flawed and imperfect? When someone opens up about their junk, we think, "you're being real," and we can relate to them. But what about the pastor who has served faithfully for decades without any scandal, loved his wife and family, and embodied the fruit of the spirit? Is this less real?

When 'Authentic' Is Actually Inauthentic

Often, what passes for authenticity in evangelical Christianity is actually a safe, faux-openness that establishes an environment where vulnerability is embraced, only up to a point.